Death By Drowning For Stricken Parks 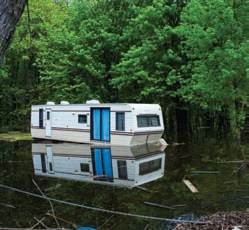 Flood waters caused damage to parks in the North.

Severe storms battered the UK at the end of last year, causing devastating floods and damage to a number of holiday parks in the North of the country.

In light of the recent floods, Britain’s Secretary of State for tourism has been told that Northern England’s visitor industry could suffer ‘death by drowning’ if more attention isn’t paid to maintaining the region’s waterways.

The warning was delivered by chairman of the BH&HPA Henry Wild at a major London tourism conference. Mr Wild said that the aftermath of December’s deluges had shown the potentially devastating impact that flooding could have on the tourism industry, particulary in Cumbria and Lancashire. He said there needed to be a body appointed with clearly defined responsibilities for ensuring that waterways were capable of removing surface water from the land.

“It appears that many holidaymakers have been heeding the message that Cumbria is determined to be back on its feet by spring with repairs made to much of our damaged infrastructure,” he said.

“We now need a clear road map which identifies the agency and the resources available to it for tackling the problem of an ever-rising water table.”

Deeside Holiday Park in Aberdeenshire was totally submerged when the nearby River Dee burst its banks due to heavy rain gales were swept in by Storm Frank. Residents, guests and staff were evacuated on December 30 at 2pm and by 3.30pm the entire site was underwater. Flood water surged through the park once more on January 3, causing further destruction.

“The reception is the only building left standing as it is on higher ground but everything else, including all the lodges, holiday homes and caravans have been demolished.

“We had some flood defences in place, but as a fairly low risk area no one could have predicted the sheer volume and power of the water that hit the park. We are just counting our lucky stars that no-one was injured.”

A major clean-up operation is underway at Deeside as water levels began to subside. Wood Leisure hopes that the park will be up and running again in time for the summer season.

Sarah adds: “We are remaining optimistic, but we have a long road ahead. We will be investing in new flood defences and hope to have some parts of the park open in the spring.”

A recent report by specialist insurance broker Towergate revealed that over the past five years, more than a third of small businesses have experienced property damage from bad weather. Yet three in five aren’t insured against flooding, high winds, thunder and lightning, snow, ice or hail – risking footing the bill for £74,000 worth of property damage on average.

Commenting on the findings, Drew Wotherspoon from Towergate, said: “Small businesses are the lifeblood of the UK economy, but too many firms are not protecting themselves against the erratic nature of British weather, leaving themselves open to footing the bill for substantial damages and losing out on business earnings.

“It’s vital that small business owners take heed of weather warnings and take precautionary measures to allow them to weather the storm and get back to business as quickly as possible.”