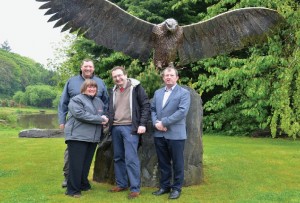 A five star caravan holiday park situated next to the Dyfi Osprey Project in Mid Wales has received a special distinction award from the David Bellamy Conservation Award Scheme. Morben Isaf Holiday Park at Derwenlas, near Machynlleth has been honoured for its partnership with Montgomeryshire Wildlife Trust’s Cors Dyfi nature reserve, where the osprey project is located. The David Bellamy Conservation Award Scheme recognises holiday parks that protect and enhance Britain’s natural environment. The park has held a gold award since 2015 and is also “Honey Bee Friendly”. Sarah Lewis, who manages Morben Isaf Holiday Park with her husband, Ben, said they were delighted to win the accolade. The park, which is owned by Salop Leisure, has 92 pitches for holiday homes and 26 for tourers. Since the osprey project was established in 2009, the park has provided support in many ways - mains water supply, accommodation for volunteers who guard the nest, car parking and manpower. The park has also built bridges and pathways to make it easier for holiday home and tourer owners to visit the project. Many of the owners are project volunteers. Rufus Bellamy, who runs the award scheme for his famous botanist father, David, said the assessor had been very impressed by the way the park has collaborated with the wildlife trust to develop the successful osprey project.