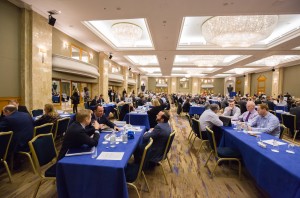 Delegates from parks across Britain were joined by senior politicians and national tourism chiefs at this January’s annual conference of the British Holiday & Home Parks Association.

Held at the QEII Conference Centre in Westminster, the event welcomed an array of high-profile speakers on a wide range of subjects which impact on the parks industry.

It was also an opportunity for many park owners to engage with their local MPs who came from the nearby Houses of Parliament to attend a lobby lunch hosted by BH&HPA.

The forward-facing theme of the conference was taken up by one of its first keynote speakers, cabinet minister and Secretary of State for tourism John Whittingdale. Mr Whittingdale told delegates to be in no doubt that the Government acknowledged and valued greatly the enormous contribution made by park businesses to the UK economy. He explained the Government’s approach to tourism support through the Five Point Plan, and added that the Prime Minister was in Cumbria that very day announcing further support following the recent flooding.

Also taking the platform as a long-time champion of Britain’s visitor industry was Lord Lee of Trafford who first addressed the BH&HPA conference 29 years ago. Serving then as tourism minister, he told delegates of the passionate belief he still holds in the need to support tourism businesses, not least because of the employment opportunities they provide. Lord Lee gave his views of successive governments’ approach to tourism, underlining that the industry needed to continue to lobby for the recognition it deserves.

The challenges faced by residential parks were addressed by Christopher Chope MP who was chair of the All Party Parliamentary Group on Mobile Homes in the previous Parliament. Mr Chope, who was a minister in the governments of Margaret Thatcher and John Major, explained how parks homes are viewed in Parliament and emphasised the need for MPs to be invited to visit parks themselves.

Other speakers included Philip Collins, the celebrated Times columnist and former chief speech writer to Tony Blair, who shared many eyebrow-raising political predictions with the conference. On a lighter note, TV presenter and actor Warwick Davies – whose film career includes roles in Harry Potter and Star Wars – spoke of his life-long love of caravanning. His amusing anecdotes took in both his early caravan experiences with his mum and dad, and the motorhome stays on parks which he enjoys today with his wife and children.

BH&HPA’s conference was prefaced by the previous day’s BH&HPA Marketplace at the Hilton on Park Lane where park owners and managers met with a myriad of different industry suppliers. The business ‘speed dating’ concept – where would-be suppliers are given just 12 minutes to put their case to prospective park customers – was judged a great success by those on both sides of the tables.