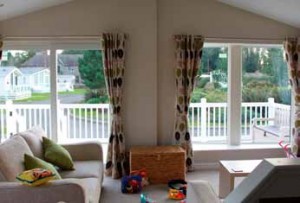 A holiday home at Haggerston Castle Holiday Park is the fourth in the UK opened by the charity which supports the families of those who have lost their lives while serving in the British Armed Forces.

A Northumberland holiday park has become a retreat for families that have lost a loved one in the British Armed Forces after a new holiday lodge was opened by a national children’s charity.

The holiday home at Haggerston Castle Holiday Park is the fourth in the UK opened by the charity, Scotty’s Little Soldiers, which supports the children and families of those who have lost their lives whilst serving in the British Armed Forces.

The lodge at the holiday park near Berwick is intended to offer more families the chance to take a much-needed break following the loss of a loved one.

Inspired by her own experience of being an army widow, Nikki Scott set up Scotty’s Little Soldiers five years ago in honour of her husband Corporal Lee Scott who was killed in Afghanistan in 2009. Currently Scotty’s Little Soldiers supports over 100 children with money raised through events, fundraising, donations, merchandise and corporate sponsorship.

Each lodge is filled with home comforts and the charity ensures that the families have everything they could need, from bedding to high chairs and toys and games. Scotty’s also cover travel fees and provide each family with £100 every time they stay to help towards both food and activities.