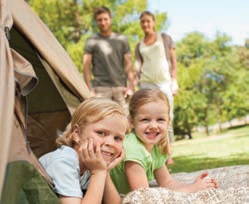 Camping has a positive impact on children’s lives according to new research by The Camping and Caravanning Club.

Children who camp in the great outdoors at least once a year do better at school and are healthier and happier. Those are the findings of a UK study carried out by the Institute of Education at Plymouth University and The Camping and Caravanning Club.

Parents and children around the UK were asked a series of questions which looked at the educational, psychological and social benefits of the camping experience to children of all ages.

More than four out of five parents thought camping had a positive effect on their children’s school education. 98 per cent of parents said camping makes their kids appreciate and connect with nature; while 93 per cent felt that it provided useful skills for later life.

Sue Waite, associate professor at the Plymouth Institute of Education said: “Interestingly, the parents surveyed believed camping supported the key curriculum subjects of geography, history and science and actually, that stacks up because the most common camping activities were natural – such as rock pooling and nature walks – where children were getting to understand ecosystems and identify lifeforms, respecting nature and the environment.”