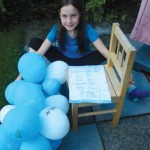 Promotional balloons from a holiday park in Clacton

At the end of each day, staff at Valley Farm Holiday Park in Clacton-on-Sea release the balloons that decorate the park’s entrance to the skies. Just recently, the park has started to include special promotional offers inside some of the balloons that can then be claimed by the recipient. However, they didn’t expect the first recipient to be over 100 miles away across the English Channel. The Wassmuth-Gumbel family from Mannheim in Germany were enjoying a summer holiday in the village of Vrouwenpolder on the south-west Netherlands coast when their sevenyear old daughter, Carla discovered the balloons. Denise Woods, caravan sales manager remarked: “For the last few years, we’ve always let the balloons fly away rather than bursting them but one of our new sales advisers recently came up with the idea of placing messages inside them. So keep your eyes peeled for them and you could receive your very own special offer or prize.”