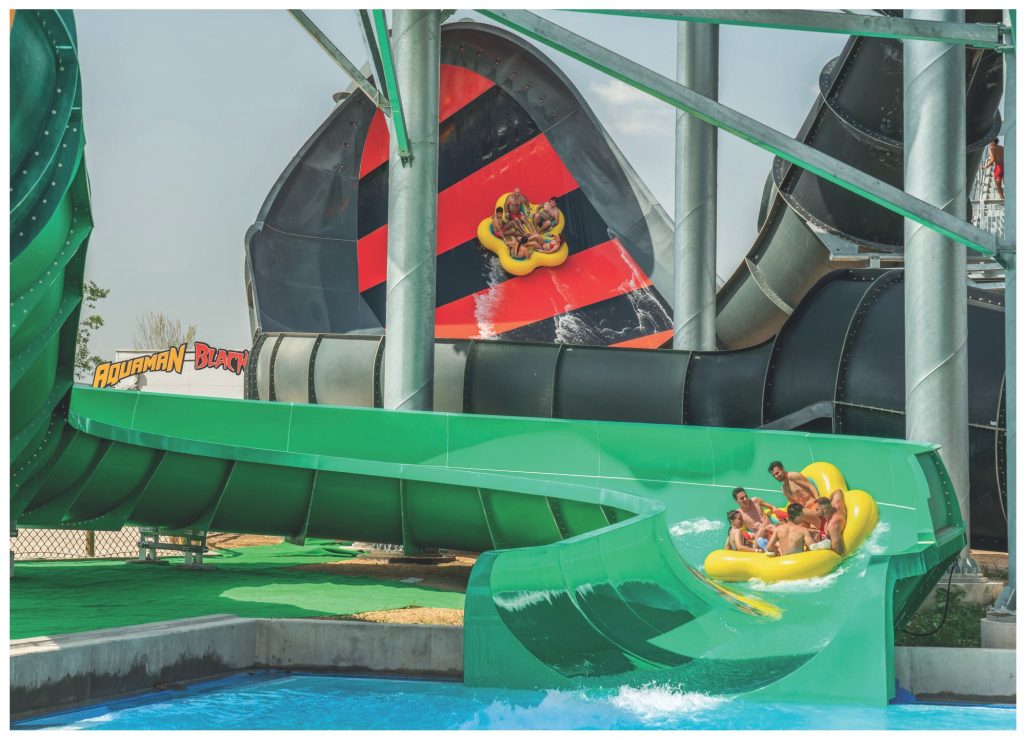 THE COMBINED WATER RIDE complex in Madrid is a first for the European market.

Parque Warner Beach is one of the main tourism and entertainment destinations in Madrid; the perfect place to enjoy a summer’s day, with 40,000m2 dedicated to attractions and entertainment themed around Warner Bros. favourite characters. Conceived as the perfect destination for a family getaway, Parque Warner Beach recently celebrated the opening of two new rides that include Europe’s first TornadoWAVE® 60/FlyingSAUCER® 45 complex, from the Canadian water ride manufacturer ProSlide.

The TornadoWAVE® 60 at Parque Warner Beach, named Black Manta, is a famous water ride feature for more than just a few reasons. In 2014 and 2017, it was part of installations that won first place at the IAAPA Brass Ring Awards, in the category of ‘Best New Water Ride’. The TornadoWAVE® at Parque Warner Beach immediately grabs the attention of anyone nearby. The first thing you notice is that it’s a striking spectacle of design and engineering, boasting what ProSlide calls “the only true arched wall in the industry”. The company custom designed the ride to give guests a thrilling experience that takes them through 120 meters of flumes and features. 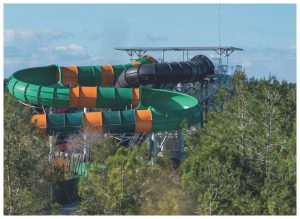 THE TORNADOWAVE® at Parque Warner Beach immediately grabs the attention of anyone nearby.

Then there’s the ride experience, which uses five-person rafts to send the riders into “near-vertical, zero-G moments”. Riders begin as the rafts gather speed and then drops into the TornadoWAVE® 60 from above. Experiencing long hang times, the rafts are specifically designed to sweep across the width of the wall while keeping riders suspended in the air before descending into an out-run. Part of the same complex is Aquaman, ParqueWarner Beach’s FlyingSAUCER® 45 – also from ProSlide. The ride shares similarities with the TornadoWAVE® 60 in that they both have instantly recognizable profiles and have an award-winning pedigree; the FlyingSAUCER® has been the recipient of Golden Ticket Awards, IAAPA Brass Ring Awards and the coveted IAAPA IMPACT Award.

Aquaman’s FlyingSAUCER® is a patented, high-speed, accelerating turn that makes riders feel like a World Cup ski racer. Riders are accelerated through the turn and experience what’s described as a “drop and dive sensation” while they race along the outer wall. In keeping with the park’s Warner Bros. theming, each ride is visually designed to complement a character from Warner Bros.-owned DC Comics. The combination of both Black Manta and Aquaman into a single, jaw-dropping water ride complex is a first for the European market.