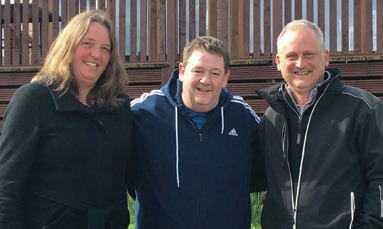 Johnny Vegas takes a break from filming in the
company of holiday park owners Barbara and Philip Carr.

Comedian Johnny Vegas has been trying his hand at holiday home living on a Cumbrian park as part of a new BBC comedy show.

The actor was at Skiddaw View Holiday Park, leading the cast in Home from Home, the pilot of which will be shown this summer.

The plot revolves around a family man, played by Johnny, who has long cherished the dream of buying a lodge in the Lake District – and finally achieves his ambition.

Featuring alongside Johnny Vegas will be Gavin and Stacey star Joanna Page, along with Silent Witness actress Emilia Fox.

Park owners, Philip and Barbara Carr said they greatly enjoyed playing host to Johnny Vegas and the cast during the filming which was based around two of the lodges on the park.